Living Among Ruins: The Experience of Urban Abandonment in Babylonia

This three-year project, which is funded by the Gerda Henkel Foundation as part of its Lost Cities programme, draws on royal inscriptions of the Neo-Babylonian Empire (626-539 BC), Babylonian Topographical Texts, temple lists, and later local sources to explore the fate of Babylon from the grandeur of the 6th century BC metropolis down to Parthian times and the visit of Trajan, charting the gradual abandonment of parts of the city and analysing the experience of the people inhabiting the city. This will provide the backdrop for a larger study investigating the experience of living with ruins and ruined cities in Babylonia, which, from the Babylonian perspective, was not out of the ordinary or (generally) viewed negatively. The cuneiform sources (generally written in the Akkadian language) examined in this innovative undertaking are rich and range from literary and scholarly compositions to private legal documents, and they allow us to approach the Babylonian experience of urban abandonment and ruination from three vantage points:

Ruins of the city of Babylon and the abandoned palace of Saddam Hussein. Photo credit: Karen Radner (November, 2018).

The project, which starts in September 2019 and runs until August 2022, aims to complete four separate, but interconnected Work Packages, By the end of August 2022, the project team anticipates producing one PhD dissertation, creating two open-access websites, completing one book, as well as expanding the content of a third (already public) website.

Work Package 1 is Lentini’s PhD dissertation project, which fully embraces the theme of the project and the funding programme in order to investigate the Lost City phenomenon in Babylonia from the philosophical, wistful, and materialist points of view. The main thrust of the argument will serve to demonstrate that in the Babylonian experience living with ruins was routine and (generally) not viewed negatively. 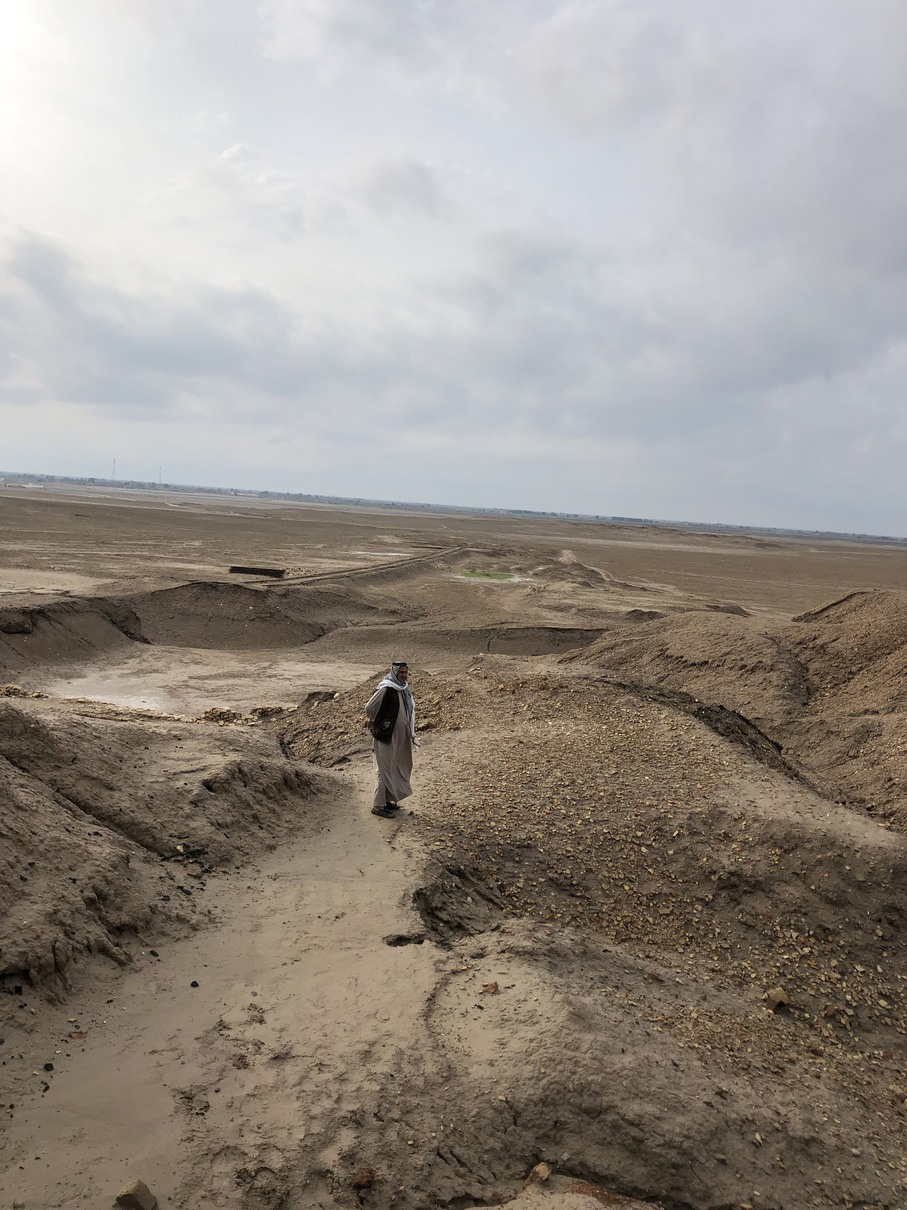 Ruins of Uruk, one of the earliest cities from which the earliest examples of cuneiform writing, possibly the earliest writing in history, were discovered. Photo credit: Karen Radner (November, 2018).

Work Package 2 is an open-access website called Babylonian Topographical Texts online (BTTo), which includes annotated (lexical and grammatical data tagging) editions (transliterations with English and German translations) of sixty-four Babylonian topographical texts and eight temple lists. These texts celebrate the status of cities as great religious centres of Babylonia and comprise lists of religious buildings and other important topographical features. The bulk of the texts deal with Babylon, while a few deal with other Babylonian cities (Borsippa, Nippur, Ur, etc.). Tintir = Babylon -- the most important cuneiform source for Babylon’s topography which lists and explains the sacred names of Babylon, its temples, and its other important topographical features and whose purpose was to glorify Babylon as Babylonia’s pre-eminent religious centre -- and the Canonical Temple List -- which lists over 600 temples and their divine owners and a composition known from three clay tablets discovered in the library of the Assyrian king Ashurbanipal (669-ca. 631 BC) -- are the centrepieces of the website. The editions are accompanied by webpages that make information about these scholarly compositions accessible to anyone interested in the topic. The purpose of the website is to update the now-twenty-five-year-old print editions and to make better known and accessible these invaluable sources for Babylon’s now lost topography. BTTo is hosted on the Open Richly Annotated Cuneiform Corpus (Oracc) platform.

Work Package 3 creates the open-access explanatory website Babylonian Temples and Monumental Architecture online (BTMAo). Given that Wikipedia is currently not a reliable source for this subject area, this site aims to make information about the most important Babylonian temples, palaces, and city walls of the 1st millennium BC freely and easily accessible to students, non-specialist scholars, and interested members of the general public. Its general structure is modelled on the Oracc-based, high-impact website Ancient Mesopotamian Gods and Goddesses, to which it serves as a companion. The most important pages are devoted to the key buildings of Babylon: Marduk’s temple Esagil and its temple-tower Etemenanki, the city walls Imgur-Enlil and Nemetti-Enlil, and Nebuchadnezzar’s so-called Southern Palace; as well as key monuments elsewhere, including Eanna (the goddess of love and war’s temple at Uruk), Ebabbar (the sun-god’s temple at Sippar), Ehulhul (the moon-god’s temple at Ḫarran) and Ezida (the scribe-god’s temple at Borsippa). 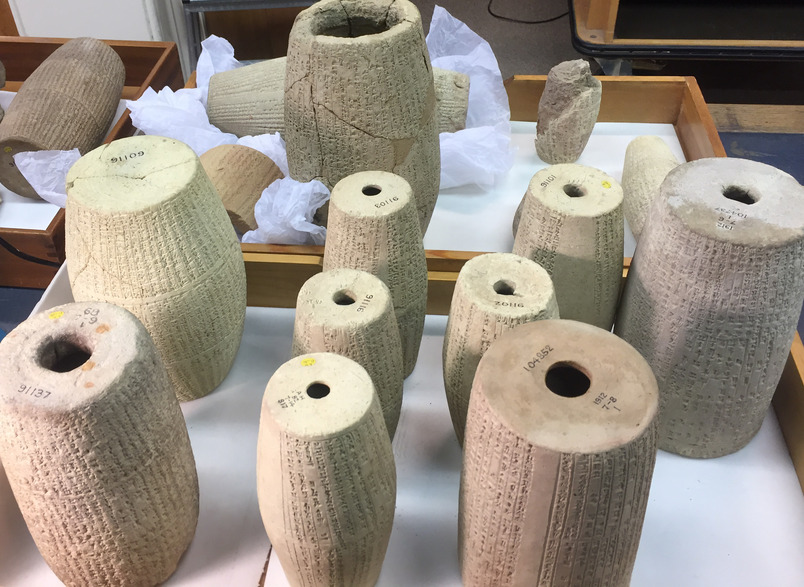 Work Package 4 produces the text editions of The Royal Inscriptions of Nebuchadnezzar II (604–562 BC), King of Babylon, Part 2 (Royal Inscriptions of the Neo-Babylonian Empire Volume 2) in a print version and as a digital edition, co-authored by Novotny and Dr. Frauke Weiershäuser (Historisches Seminar, LMU Munich); the contents are also made available via the already public Babylon 7 sub-project of Munich-based, open-access Royal Inscriptions of Babylonia online (RIBo) Project. RINBE 2, the third and final volume of LMU Munich-based Royal Inscriptions of the Neo-Babylonian Empire (RINBE) Project, will include eighty-six Akkadian inscriptions of Babylon’s most famous king Nebuchadnezzar II. These are written (and stamped) on mudbricks, eyestones and stone vases from Babylon; clay, barrel-shaped cylinders and mudbricks from the Babylonian cult centres Borsippa, Isin, Kish, Larsa, Marad, Sippar, Ur, and Uruk; eyestones and stone beads from Persepolis (the capital of the Persian Empire); and rock reliefs carved on cliff faces in Lebanon (Nahr el-Kelb, Shir as-Sanam, and Wadi Brissa). Most of the texts, especially those on cylinders, record Nebuchadnezzar’s building activities in Babylonia.