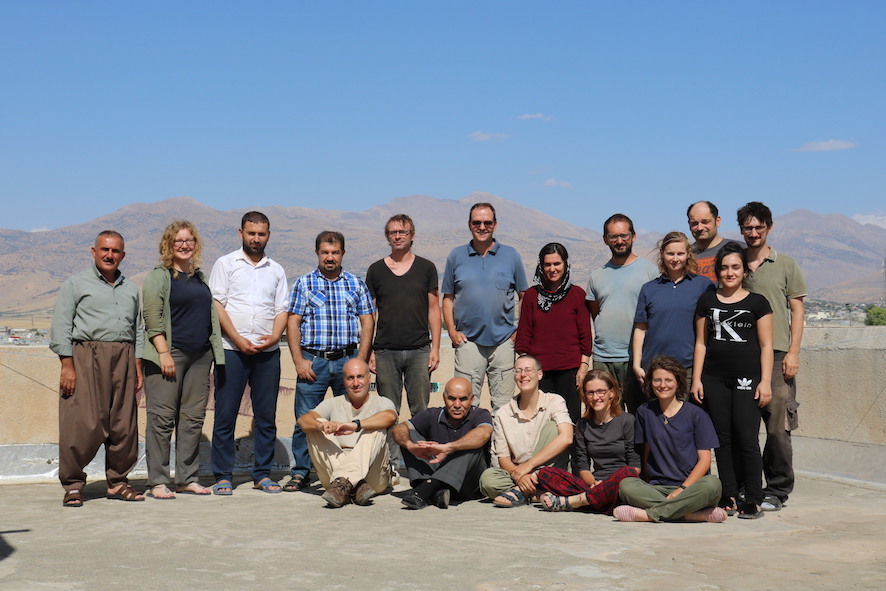 In September 2019, excavations were resumed on the western slope of Qalat-i Dinka in the operation called QID1, where the PPP had already worked in 2016 and 2018. In this operation, the monumental Building P was unearthed, which clearly stands out from all the buildings of the lower town for its layout and architecture (Figs. 1-2). The 2019 trenches were opened to the north, east and south in order to further investigate the ground plan and the extension of Building P. The new excavation opened an area of approx. 110 sqm. 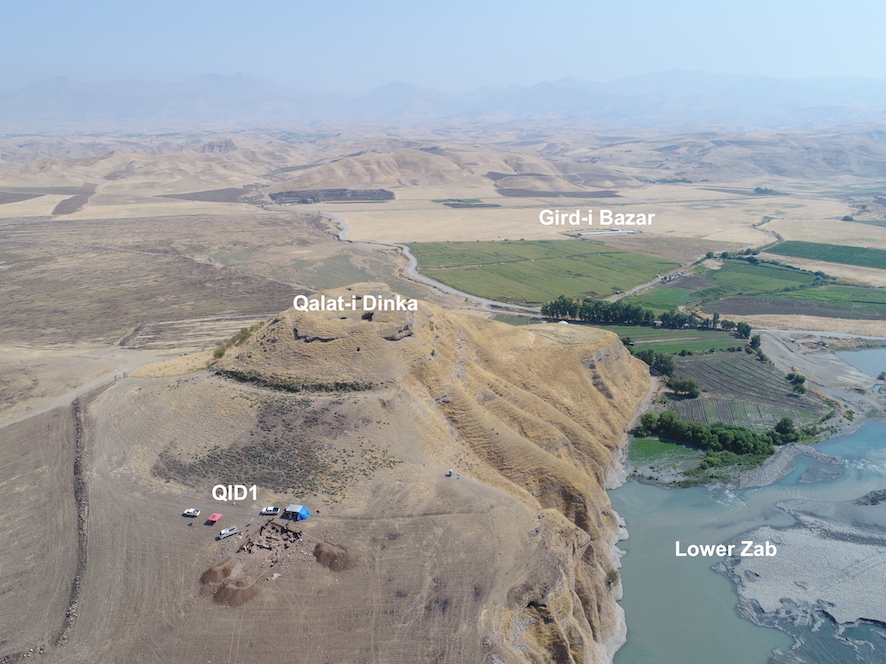 Fig.1. Drone photo of the western slope of Qalat-i Dinka.

It was discovered that before the construction of Building P there was an older building, as evidenced by two walls (L65 and L66) unearthed to the south of Building P, which were probably once connected by a corner, not preserved anymore because of a later tomb that had destroyed the connection between the two walls. To the northern edge on of the walls, remains of a floor were found lying under the southern boundary of wall LGR:0329 of Building P, indicating that this floor and the walls belong to an older phase. Unfortunately, the looting pits reached down to the virgin soil, so this older phase is very badly preserved. 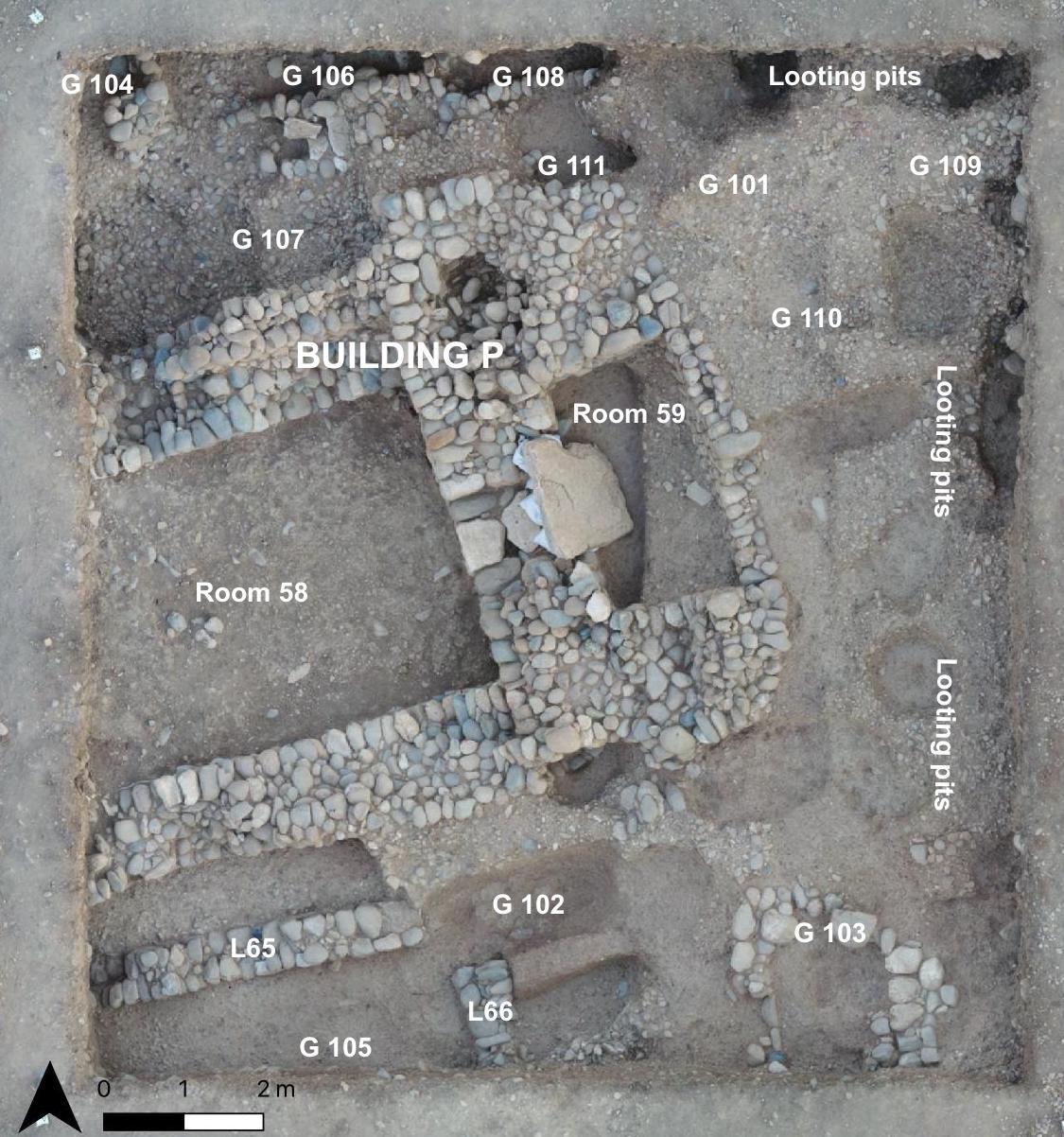 Fig. 2. Orthophoto of operation QID1 at the end of the excavation season.

Another result of this campaign is that Building P, at least within the excavated areas, is a free-standing building consisting of only Rooms 58 and 59. In the north, east and south, the building is surrounded by open spaces characterised by pebble accumulations. Since the terrain surface is steeply sloping from northeast to southwest, Building P was founded deep into the virgin soil in the east in order to maintain reasonably horizontal floors in Rooms 58 and 59.

Room 58 is connected to the east to Room 59, whose northern and southern walls are particularly monumental reaching a width of about 2.5 m. The eastern boundary of the room, on the other hand, is relatively narrow with approx. 0.6 m width. A large stone slab with a round depression in a corner was found already in 2018 inside this room, alas not in its original position. The higher level of Room 59’s floor than Room 58’s gives the impression that Room 59 could have been the cella of a temple. In 2018, radiocarbon dating from a charcoal collected from the floor of Room 58 points at an Iron Age date for the building (c. 1001-891 calBC).

The Iron Age architecture was cut by later graves originally equipped with many valuable finds, which were partially looted by robbers in recent times. Despite this, several finds could be collected from the graves, which had been overlooked or left over by the looters. In total, 11 graves were unearthed. At least three of them were cist graves as the remains of stone cists were still preserved (Graves 102, 105, 107 and 111) (Fig. 3). 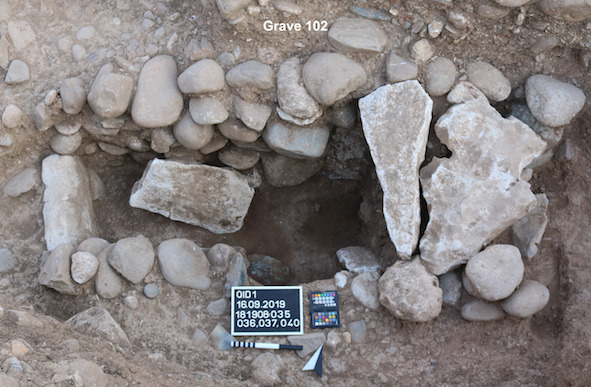 Other inhumation graves (with no evidence preserved for their architecture) were Graves 103, 104, 106, 108, 110, of which 106 and 110 yielded skeletal remains associated to small finds. In addition to the inhumation burials, two cremation burials were found (Graves 101 and 109). In both, ash remains with small bone fragments were found in pit-like depressions with reddish patches caused by heat. In Grave 101, human bones were found in a jar covered by a bowl, that evidently was missed by the looters as it was found still in position (Fig. 4). The jar and the bowl have narrow morphological parallels from Hasanlu and Dinkha Tepe level 2 which would suggest a date still within the Iron Age horizon. 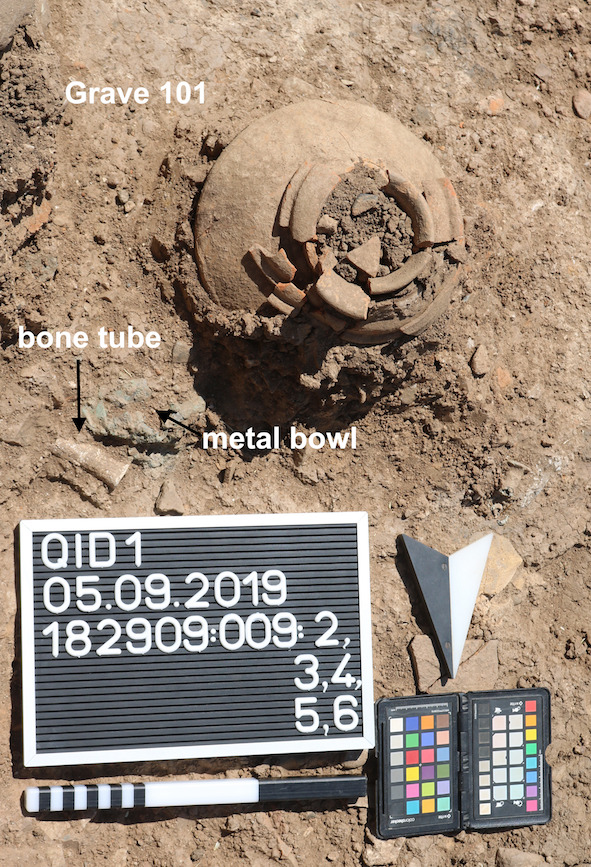 The graves yielded a rich repertoire of small finds: decorated bone tubes, bronze bowls (of which one almost completely preserved), cylinder seals, numerous pieces of jewellery made of iron, bronze, one golden earring, and bronze fibulae (Figs. 5-6-7-8). Comparisons to some of these items can be found in Late Iron Age levels of sites located in Western Iran, which may suggest that at least some graves were not much later than Building P. Several samples for radiocarbon dating were collected from the graves so to establish their chronological affiliation. 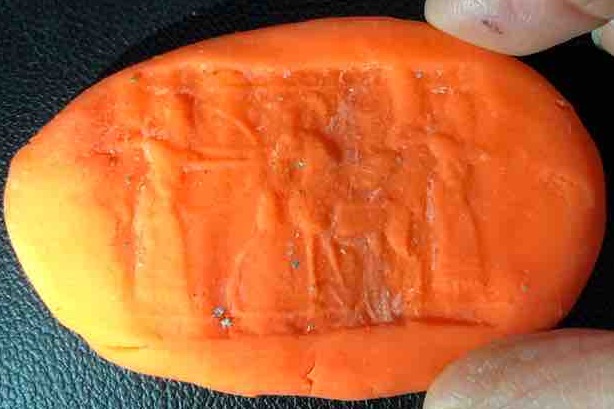 Fig. 5. Impression of a seal from Grave 110 showing a hunting scene.

Fig. 6. A bone tube decorated with linear motifs from Grave 101. 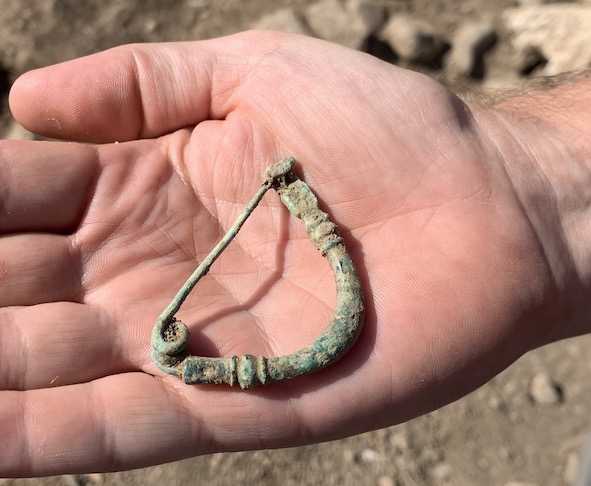